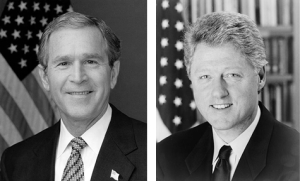 Were the 2014 midterm elections historic? Yes. Midterms are always historic when a party takes control of either the U.S. House of Representatives or Senate, as the Republicans did this go around. These midterms, however, are also historic because they broke a 20-year trend set by Republican President George W. Bush and Democratic President Bill Clinton.

Barack Obama is the first president whose party lost both midterm elections since Ronald Reagan, when the Republicans lost Congressional seats in 1982 and control of the Senate in 1986. During Obama’s presidency, not only did the Democrats lose each midterm, but they also lost the balance of power both times, with the Republicans retaking the House in 2010 and the Senate in 2014.

Obama’s immediate predecessors, George W. Bush and Bill Clinton, had better midterm elections, experiencing a split. Both saw their party lose seats and the balance of power in one midterm while claiming victory in another midterm.

With his Iraq policy becoming increasingly unpopular and unworkable, Bush and the Republicans took a huge loss in 2006, when the Democrats took back the House. In his post election press conference, Bush said, “Look, this is a close election. If you look at race by race, it was close. The cumulative effect, however, was not too close. It was a thumping.”

Likewise Clinton, a Democrat, took a drubbing in 1994, when the Republicans gained the House for the first time in forty years. In his post-midterm election press conference, Clinton said, “I must certainly bear my responsibility for it and I accept it.”

Both Bush and Clinton also had reasons to smile after a midterm election. The Republicans gained ten seats during Bush’s first midterm election in 2002. With a strong economy and a balanced federal budget backing him, Clinton’s Democrats gained five seats in his second midterm in 1998.

The fact that Obama’s party lost two midterm elections is now history. What President Obama does with this loss will determine his lasting legacy. His predecessors’ post-midterm decisions are good ones to follow.

After the disastrous 2006 midterms, Bush changed his Iraq policy and his defense secretary, which led to the successful surge of troops that brought more stability to the region.

Likewise after losing badly in 1994, Clinton and the Republicans battled over welfare reform until they found agreement in the Welfare Reform Act of 1996. They also eventually agreed on a balanced budget for the first time in 30 years, which gave bragging rights to both parties.

Bush and Clinton took their losses on the chin, showed that they’d listened to the electorate, and made changes for the better.

Jane Hampton Cook is the author of America’s Star-Spangled Story and American Phoenix and six other books. http://www.janecook.com/books.htm

Author Jane Hampton Cook is known for making history memorable and relevant to today’s news, current events, and modern-day life. A frequent guest on the Fox News Channel and other outlets, Jane is the author of eight books, including American Phoenix, America's Star-Spangled Story, and Stories of Faith and Courage from the Revolutionary War. Jane is also a former White House webmaster. She lives with her husband and three young sons in Fairfax, Virginia. http://www.janecook.com http://www.amazon.com/American-Phoenix-Quincy-Louisa-Independence/dp/1595555412/ref=pd_bxgy_b_img_y
View all posts by Jane Hampton Cook →
Quote | This entry was posted in History, Politics and tagged Barack Obama, Bill Clinton, election, George W. Bush, midterms. Bookmark the permalink.